Getting Omegle unblocked is a major concern among site visitors. Even though the “banning” feature was introduced to block trolls and bots, sometimes even you can get blocked for no apparent reason.

This is where a VPN can help you – a connection should be established at all times necessary.

Omegle was that one “site” no one knew anything about until the pandemic occurred. Now, it has high traffic and is immensely popular, especially among kids. Unfortunately, Omegle isn’t owned by a mainstream corporation. In fact, an 18-year-old developed the site, it is definitely not secure.

Note that Omegle has no concern for security whatsoever. Hackers, ISPs, and network administrators can easily peek into your data.

Plus, schools, workplaces, and other environments consider Omegle as a “spammy” site – it is blocked nearly everywhere.

Only Omegle with VPN will allow you access without any interruptions. So, which VPN should you subscribe to?

Fortunately, we have compiled a list of the best VPNs to unblock Omegle. Read on and decide on a VPN.

After going through many VPNs, we evaluated ExpressVPN as the “best” to unblock Omegle. It stood out as the number ONE VPN for Omegle because it provided the best speed, top security, and a wide range of servers. 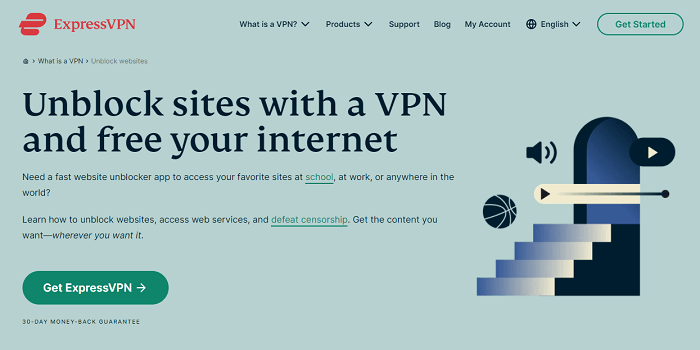 ExpressVPN has a  premium-like reputation, known for the speed it provides. Talk to one stranger on Omegle, and then another instantly with ExpressVPN. During our tests, we found the average speed to be 135 Mbps. HD streaming worked fine along too.

In terms of security, ExpressVPN has a state-of-the-art 256-bit AES encryption, blocking all sorts of malware. Take advantage of the VPN’s no-log rules. Safely use Omegle in school or anywhere. If you’re still unsure, enable DNS leak protection – make the connection even more secure.

Best of all, ExpressVPN supports wireless routers as well – manually establish a connection. And as usual, the VPN is available on Windows, iOS, Android, Mac, and Linux. Compatible with most platforms, use it on multiple devices simultaneously – up to 5 connections allowed. The application is exceptionally optimized for each platform and lightweight in use.

Lastly, unsubscribe at any time. ExpressVPN has high-quality standards in terms of customer service as well. Each subscription comes along with a  30-day money-back policy. This VPN might be relatively more expensive, but considering the features – it is surely worth the money. 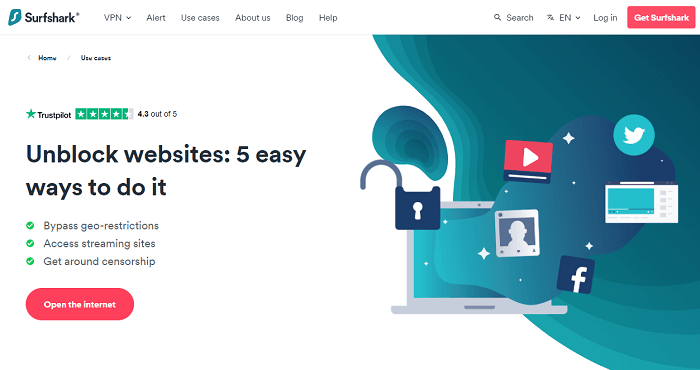 Surfshark truly stood out when we tried to unblock Omegle. The military-grade encryption combined with fast-speed connectivity allowed a smooth Omegle experience – easily use the video chat feature.

Once you switch away from the VPN, the RAM-only servers wipe all the cached data on Omegle. It’s definitely safe to use, no-log are kept. Plus, the AES-256 encryption ensures that no hacker trespasses.

When we said fast-speed, we meant it. Surfshark shows an average of 72 Mbps and the WireGuard protocol keeps that speed “consistent” along with increasing security measures.

Overall, Surfshark is an affordable VPN, packed with features. Prices start from just $2.05/mo and you can even get a refund – there is a 30-day money-back guarantee.

NordVPN is quite similar to other VPNs, but there’s one feature that stands out – it has more than 5200+ servers. With NordVPN, you can pretend to be anywhere. Getting banned from Omegle won’t be an issue anymore. Select any server and access Omegle from a restricted place.

After constant trials, the streaming speed turned out to be around 115/135 Mbps – that’s more than enough for using Omegle’s video chat. And it barely took any time to set up the connection and open Omegle – it’s a lightning-fast VPN with a strong no logs policy.

NordVPN is further engrained with AES-256, a high-standard encryption choice. Protect your data and have an anonymous experience online, this VPN redirects all traffic and has a no-log rule.

Omegle often has a lot of “bugs”. Turn on Cybersec and avoid it altogether. A VPN with such credentials is a must-have.

In case you don’t approve of the service, ask for a refund anytime. NordVPN considers customer support as its utmost priority. There is a 30-day money-back guarantee.

The VPN is further compatible with routers as well. A lightweight software, it can be used as a browser plugin on Chrome and Firefox. Use NordVPN on Windows, Mac, iOS, Linux, and Android.

CyberGhost is a budget-friendly VPN that does exactly what its “name” proclaims. Unblock Omegle and use it as a ghost – your IP address won’t get undisclosed. The VPN redirects all malicious traffic with 256-bit encryption, keeping no logs as well.

The 7700+ servers were fast when we tested a handful of servers. The average streaming speed is 58 Mbps, it might be less than other choices but honestly, we didn’t face any problem when opening Omegle.

It is an ideal VPN for average users, with unlimited bandwidth included. The speed could go up to 80 Mbps during non-peak hours; easily use Omegle during late nights.

CyberGhost supports all sorts of devices, compatible with all. Including smart TVs, routers, and consoles. Set up the lightweight application as a plugin on Chrome or Firefox. Or install it manually on routers. The VPN is easy to install on Windows, Mac, Android, iOS, and Linux.

If you get a long-term subscription, there is a 45-day money-back guarantee awaiting. Monthly subscribers can get a refund under 14-days. A go-to choice, it is highly recommended. 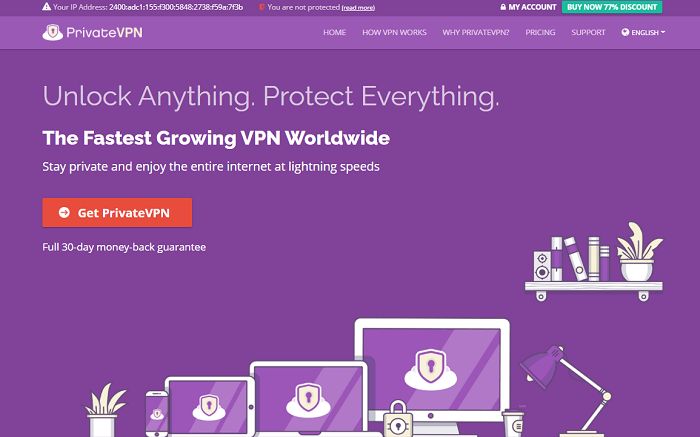 PrivateVPN is an underrated tool that needs a lot of attention. The features, security measures, compatibility, and speed needs to be appreciated. PrivateVPN has few but well-performing servers – we easily used Omegle, facing no issues.

If speed is a concern, you’d appreciate PrivateVPN. The download speed is 65 Mbps and the uploading one is around 5 Mbps – Omegle is exactly optimized for that range of speed, there’s no need for 4K streaming. Some servers can have an even higher speed, depending on the number of users online.

PrivateVPN’S small network is safe to use. The standard 256-bit is used for encryption, keeping IP addresses confidential. Hide your identity and use Omegle.

The VPN has a strict no-log policy, even sign-up details are encrypted. The encryption is supported by a 2048-bit DH key to making sure that the connection is as “private” as possible.

You may cancel the subscription anytime, just contact them. New users can avail a 30-day money-back as well, get a refund under 5 days.

So, install the VPN on either Android, iOS, Mac, Windows, or even Linux. Router support is also included but the setup is complicated.

What free VPN works with Omegle?

A free VPN can always be used but we don’t recommend it – definitely not for Omegle. On paper, it might seem perfect. But even the most popular ones don’t work well. To unblock Omegle, you need a highly secure VPN.

Free VPNs capitalize on user data. They rely on targeted ads, selling data, third parties, and keeping logs. Saving a few bucks but getting an unpleasant experience, in the long run, isn’t worth it.

Why does my VPN not work on Omegle?

Omegle’s site might lack many features, but they are very strict with blocking VPNs. You might come across this error:

Without a properly functional VPN, you cannot use Omegle. You need to evaluate each VPN because most don’t unblock Omegle. Even schools and some countries (keep reading, we’ll explain) have blocked Omegle.

A lot of VPNs aren’t even capable of unblocking local firewalls. So, to avoid lackluster VPNs, go through the list. That’s why we recommend security-oriented tools such as ExpressVPN or Surfshark.

Is it legal to use Omegle with a VPN?

Yes. There is nothing wrong with using a VPN to unblock a fun site like Omegle. A VPN is designed to bypass restricted spaces. However, a VPN shouldn’t be used for illegal purposes.

If you install a VPN to download copyrighted material or visit a dark website, you could land in legal trouble. In the worst-case scenario, years in jail.

Now, some countries always restrict content. It’s not always necessarily about Omegle but websites that are VoIP-based. Governments cannot track sites like Skype, FaceTime, and Whatsapp – they want to monitor it. A VPN can help you at this stage.

The following countries have blocked Omegle, along with several other sites: Oman, China, the UAE, Libya, Jordan, and Qatar. If you live in either of the countries or plan to visit – use a VPN.

How to get unblocked from Omegle?

Follow a simple, three-step process. Get a VPN, select a secure server, and open Omegle – that’s the only way. Also, the VPN needs to be a well-functioning one.  Omegle hasn’t claimed that they “restrict” VPNs, but it is apparent.

Again, It should be remembered that Omegle is an unsafe site with no security protocols. We strongly advise that you open Omegle with caution. There have been reports of indecent behavior, trolling, and even blackmailing on the site.

With that being said, use a powerful VPN like ExpressVPN, Surfshark, NordVPN, and the other choices we mentioned.