You are here: Home / VPN / The Simplest Way to Spoof Location for Pokémon Go And Change GPS Location

Pokémon Go is an astonishingly popular game that had 28.5 million daily users at its peak. Its allure and addiction lie in its existence in various parts of the real world.

The developers have added other location-based characteristics to the game, such as needing to walk a certain distance to hatch Pokémon. But fun as they might be, they’re not always practical: especially when you are based in a geo-restricted location where Pokemon Go isn’t available.

Fortunately, unlocking all the adventures of Pokemon Go is possible, because it is 2023 and the tech world has got tools like VPNs and fake geolocation setters. Read on to find how to spoof Pokémon Go locations and find PokeStops.

The first step into spoofing Pokémon Go is using a VPN. You can find a detailed tutorial below.

For this purpose, we recommend using ExpressVPN because of its lightning-fast speeds, and the affordable price for a reliable VPN service. Further, the highest encryption standard, huge list of global servers, simultaneous connections, and the proven ability to unblock restricted content only adds to the pros of ExpressVPN.

Then, activate the fake GPS app and set the location of your choice.

Be warned, though! Pokémon Go monitors their servers looking for players whose locations don’t match their phones’ GPS coordinates. If found, Pokemon Go could ban or suspend the accounts of such players.

We recommend getting it directly from the official website rather than Play Store so that you get the exclusive discount on ExpressVPN. Download the app to your device. With every subscription, you get a 30-day money-back guarantee, so if it doesn’t perform according to your expectations, then you can always try another without any financial loss.

A GPS spoofing app requires you to root your device as the apps are constantly changing and present some risk. You can search for the latest one online, set it up, and select a location where you’d like to go hunting for Pokémon.

3. Choose a server you want to fake location to

Once all the steps mentioned above are completed, you can download the game and play it from your new virtual location.

Research reveals that on a regular day, 1 in 10 Americans was playing this game. Due to the nature of the game, Pokémon Go is incredibly popular, but people in rural areas see fewer Pokémon than those in the city.

There are also some countries that have limited access to download or use certain features of the game. Some ISPs restrict players from hunting Pokémon on corporate or school campuses. If you want to travel a road to bypass all such hurdles, you need a VPN in conjunction with a Pokémon Go location spoofer for Pokémon Go.

There are 5 solid reasons why you should prefer using a VPN to unlock Pokemon Go:

The best VPN apps keep you almost anonymous and secure online while allowing you to change your IP address and appear somewhere else in the world. Not all VPNs have the capacity to alter your GPS, and the same is the case with ExpressVPN or Surfshark.

You can get a subscription, set registered, launch the app and choose a server you want to appear located in.

How to Change your Pokemon GO location in Android

After downloading a working Android VPN app, the steps to changing your location depending on which operating system you are using. In the case of an Android device, follow these steps to avail all the benefits of the VPN and GPS spoofing:

It can certainly be challenging to find a reliable VPN when learning how to spoof Pokémon Go, so we have made it easier for you to make a decision.

ExpressVPN is a top choice when hunting for the evasive Pokémon. It offers an incredible choice of 3000+ servers in 94 countries. You can secure up to five devices simultaneously with a single subscription. Its list of features is vast and varied with 256-bit AES, encryption, kill switch, and maintains your privacy by keeping no logs that could be used to identify the user.

Encryption means that a hacker will not be able to view your online activity or figure out what pages you visited online since your traffic passes through a private route. 256-bit AES is the highest of these standards and means that hackers would have to make 256 attempts to crack your online activity: which is not possible even for an advanced hacker.

A kill switch ensures that your device disconnects from the internet in case a VPN connection is lost. This protects users on gaming and torrenting platforms from accidentally exposing the IP address.

It is efficiently compatible with all major operating systems, and you can even sign up using Bitcoin, that too anonymously. The 24/7 live chat feature is certainly handy if you are not too tech-savvy or facing problems setting up the VPN on your device. After the discount, the yearly package of ExpressVPN is $6.67/mo, with three months absolutely free.

Surfshark is an inexpensive VPN and has dedicated apps for all major operating systems with access to 3200+ servers in over 65 locations. Given the numerous locations, you can go collecting Pokémon worldwide without actually having to fly from one region to another. The number of simultaneous connections has no limit, which means you can play on various devices and keep them protected all at once.

Surfshark doesn’t log any identifiable data, has a kill switch in case of accidental disconnection from the VPN, and offers reliable speed meaning those Pokémon have no chance of getting away from you. You can hunt your desired number of Pokemon Go from unlimited devices for a monthly payment as low as $2.30/mo (Save 82% and get 2 extra months FREE with 24-month plan). 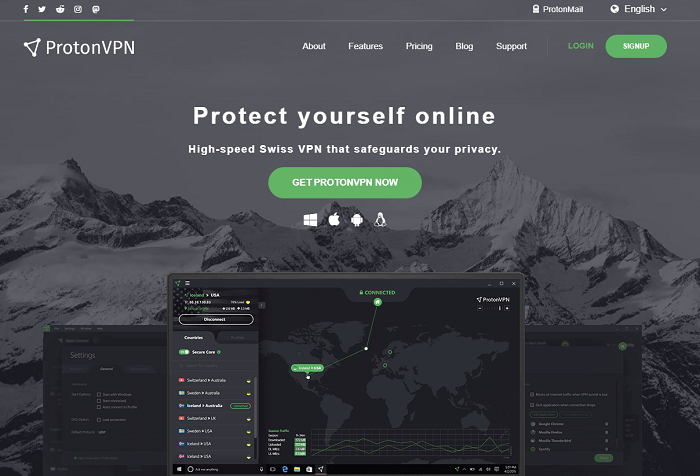 With over 1700+ servers in 60+ countries, ProtonVPN makes sure you get high bandwidth by connecting to the nearest server. Since its main focus is on privacy, ProtonVPN hides your IP address and does not sell your browsing history or other information to third parties. It has a free version that is subsidized by its paid users but does recommend upgrading to the paid subscription for faster speeds and optimal security coverage.

It is able to connect to 10 devices at a time, has 24/7 tech support, a kill switch, P2P support, unlimited bandwidth, ad blocker accompanied by military-grade encryption.  Many of the servers on their list offer a 10 Gbps connection making it one of the fastest VPNs in the market with an easy-to-use interface so that all tasks can be accomplished with a click.

Pokemon Go spoofing has never been easier now that you know which VPN to utilize. To add icing to the cake, these VPNs have a 30-day money-back guarantee or free versions that make it easier to commit to a choice after trial and error.

Can I Spoof Pokémon GO location in 2023?

Yes, spoofing a location for Pokemon Go is possible with a dependable VPN and a GPS spoofing app. In the case of an Android device, you need to go into developer mode, and when using an iPhone, you need to root or jailbreak your device to spoof your location.

Can you play Pokemon GO while connected to a VPN?

Yes! In fact, it is highly recommended that you can trot easily all over the globe in an effort to capture Pokémon Go that wasn’t quite as easy previously.

What is the best VPN to use for Pokemon GO?

ExpressVPN is our recommended consumer-side VPN brand and is the ultimate go-to choice for Pokémon Go location spoofing. Other than ExpressVPN, Surfshark and ProtonVPN are also viable options.

Can I use a fake GPS app only to spoof location for Pokemon Go?

No. You can’t successfully access or continue playing Pokemon Go without a VPN. This is because the game’s software structure detects the IP address and matches it with your GPS coordinates. If they don’t match because of the unavailability of a VPN, a player can get temporarily suspended (7 days for the first time) or permanently banned.

Don’t let your present location hold you back from catching Pokémon and enjoying the most happening game of this century. Now that you know how to spoof Pokemon Go, the hunting opportunities are endless, and the world is your oyster.

The only tools needed to turn this plan into reality are a trusty VPN (ExpressVPN, Surfshark, or Proton) and a GPS spoofing app that makes you teleport to any location of your desire while keeping you safe from being caught by the developers or other predators lurking in the deep internet waters.