China is infamously known for its authoritarian rule and intense censorship. China’s communist regime has continuously restricted its citizens from accessing foreign sites.

Media in China is strictly monitored and the authorities in charge have always silenced those who speak anything remotely against the government or the country’s so-called values.

If you’re a tourist or an expat visiting there, keep in mind that most “essential” services that you use in the west don’t work in the People’s Republic. Be it YouTube, Netflix, Facebook, or any other major service you are aware of.

Most importantly, you can’t access Gmail; answering colleagues, friends, or loved ones back home isn’t possible. However, there is an alternative. This is where a VPN comes into play. Keep reading as we do a breakdown of how to access Gmail in China:

Accessing Gmail in China isn’t easy, despite the fact that it is undoubtedly one of the most well-recognized email services. As a product of Google, it is an important part of the “ecosystem“. And unfortunately, Google and China have a long, sensitive history.

China’s censoring phase started in 2009 – this was when they started to block western-based media sites that covered a certain “protest“. Eventually, in 2010, Google redirected all its searches to Hong Kong’s site, leaving mainland China altogether.

However, Gmail still worked with protocols such as SMTP, POP3, and IMAP but disruptions were common. It wasn’t until 2014 when China had banned Gmail, and that decision hasn’t changed since. Theories suggest that China wanted to eliminate Google’s presence as much as they possibly could. Apparently, Google refused to remove searches that targeted the Chinese government.

And that is why, to this day, you can’t use any of Google’s products in China. Having an authentic VPN by your side is necessary to access Gmail or any other blocked site.

However, which VPN is considered the “best” these days? After going through several tools, we concluded 2022’s top-rated VPN – ExpressVPN as the best in terms of security, reliability, and user-friendly UI. 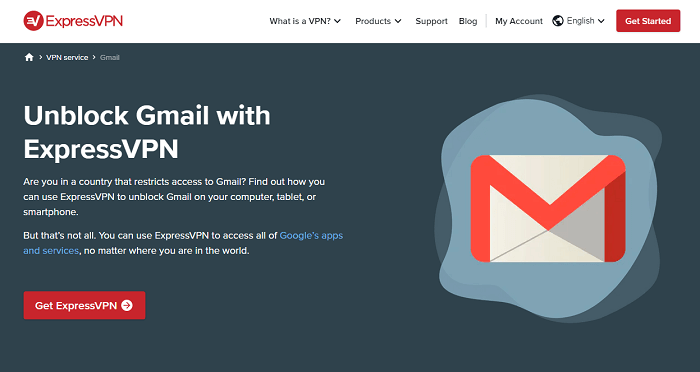 ExpressVPN was founded eleven years ago and has so far helped millions of users surf around the internet anonymously, protecting their data at every step.

ExpressVPN even has it’s own set of independent DNS servers and is one of the few VPNs that work in China. Well equipped with high-end encryption, it’s virtually impossible for a hacker to breakthrough.

Considering that the VPN has 3000 servers spread across 94 countries, with 3 servers in Singapore, 3 in Hong Kong, and a lot of near China. easily shifts from one server to another. There are no chances of interruptions in-between.

Incorporated with the latest technology – Lightway is an ExpressVPN protocol that is even more lightweight in terms of code and has better connectivity, longer battery life, and basically handles networks in a better way. Other protocols such as OpenVPN and IKEv2 are included as well.

The Lightway protocol even has better encryptions, it is equipped with AES-256-GCM and ChaCha20/Poly1305. Rest assured, your data is secure with ExpressVPN as it even guarantees DNA-leak protection.

And even if the VPN connection drops, the Network Lock (kill switch) ensures your data’s protection. Also, ExpressVPN operates from the Britain Virgin Islands, there is absolutely no obligation for it to obey data retention laws from there.

ExpressVPN has a sleek, reddish, easy-to-use UI that anyone can get the hang of. It easily lets you log in, and choose servers and protocols – simple, and straightforward.

To get a better understanding, we tested put ExpressVPN’S connectivity speed with Ookla, a speed test tool. The results were impressive. ExpressVPN had an average download speed of 58 Mbps on a 100 Mbps connection, which is not bad for checking emails in Gmail.

Easily stream a 4K video chat with a colleague, or send large files on Gmail – it is not difficult, and won’t take much time.

Also, you can connect the VPN across all “5” of your devices simultaneously, on – Windows, macOS, iOS, Android, Android TV, Nvidia Shield, Linux, and Amazon Fire TV.

Get ExpressVPN’s most popular $6.67/mo plan at 49% off – this deal includes three months of free usage as well.

Or you can opt for a simple, everyday plan and get the same unlimited high-speed bandwidth. At $12.95/mo, get a monthly subscription – it’s light on the pocket. And if not these, get a six-month deal at just $9.99/mo.

24/7 customer support in the form of live chat is always there to help you out. For any queries, contact them. To subscribe, follow a simple 2-step process:

How to Use a Free VPN for Gmail

Now, if you’re on a budget and want to test out a few VPNs before buying one, avail refund or free cancellation offers.

ExpressVPN in particular guarantees a cash-back refund in under 30-days. We even have verified their no questions asked money-back guarantee.

It’s a simple process, just reach out to them and get your money back – no questions asked. Even better, there is a 7-day free trial on mobile devices. If you’re remote most of the time, use the VPN on your phone and check Gmail on the go.

There are a few other VPNs you can use up to a month for free as well. Here’s a detailed look: 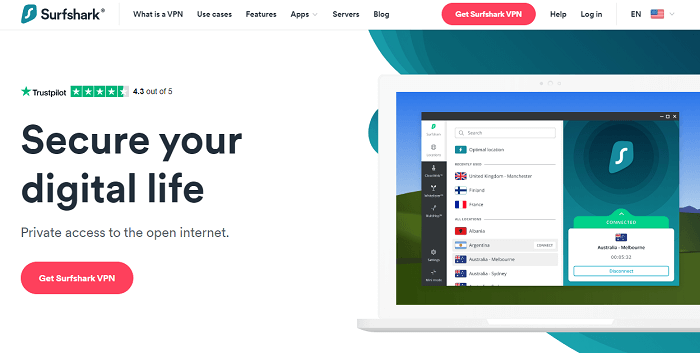 Surfshark is a cheaper alternative to other VPNs, yet is just as competent, if not more. All incoming traffic is encrypted through AES-256.

Apart from OpenVPN and IKEv2, there is a different protocol worth looking into – Shadowsocks. This is one of the few protocols that can bypass China’s censored “firewall“.

Also, similar to NordVPN, this VPN operates from foreign territories as well. In the British Virgin Islands, there are no chances of data hoarding – it’s as safe as it can get. And Surfshark doesn’t keep logs anyway, at least to an extent. Login details, credit card info, and forms are automatically saved though.

Priced at just $2.05/mo for a 24-month-long plan, it’s a bargain. And there’s a moneyback under a 30-days guarantee, so there is nothing to lose. Easily torrent files and send them to Gmail since this VPN has hundreds of P2P-optimized servers. And you are going to remain anonymous, even your local ISP can’t detect it.

Being a “new” name, Surfshark is continuously providing updates; improving their UI and support for other platforms.

Now, you can use the VPN on Windows, macOS, iOS, Android, Linux, and even TV devices – Apple TV and Fire TV. If you’re unsatisfied with the service at any point, get an instant refund in under 30-days. 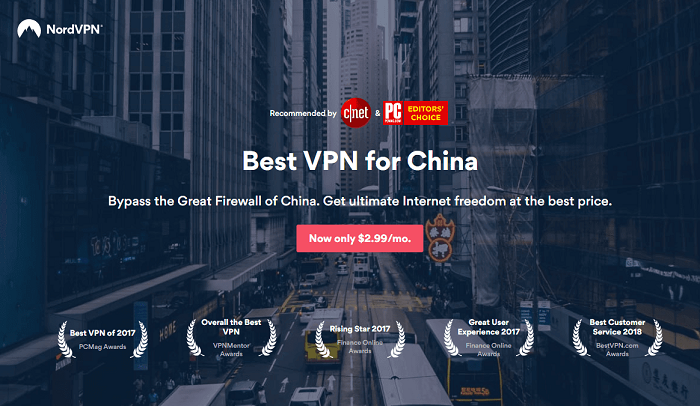 NordVPN is a relatively new VPN packed with an abundance of features; no log, instant connectivity, multi-platform support, 24/7 customer support, and much more.

Most importantly, NordVPN is quite diverse in terms of servers – connecting across 59 countries. You can easily pick a server and get uncensored content in China.

And this tool doesn’t just claim “anonymity” – the company’s headquarters testifies it. Established in Panama, this VPN is far away from data retention laws.

In technical terms, the protocol and encryption aren’t any less either. Powered up by OpenVPN and IKEv2/IPSec as the protocols, along with AES-256 as the encryption, it definitely has high-grade standards. After thorough research, it was also concluded that NordVPN is ranked as one of the top fastest VPNs.

Purchase this VPN’s cheapest subscription right now at $5.29/mo with a two-year subscription. An added bonus, get three additional months for free, or cancel the service altogether and get a cashback under 30-days. Available on both desktop and mobile.

Private Internet Access is a reputable, well-established VPN that caters to millions of users around the world. This VPN has Thousands of servers situated in 70+ countries.

Now that they have this many servers, “data protection” is being prioritized the most by PIA. And especially for China-based users, PIA’s privacy policy should not be overlooked.

To maintain it’s premium reputation, PIA has built-in two of the best protocols known, OpenVPN and WireGuard. For technical ease, this VPN allowed users to change the encryption default (AES-128) to others.

However, unlike ExpressVPN, PIA doesn’t operate from an overseas territory, it obliges by the orders of the US government. So, the company’s privacy policy is a bit sketchy. This VPN hasn’t released its audit reports for public use as well.

PIA has three plans which may not be as “cheap” as other VPN’ prices, but it’s definitely worth it.

Starting at $2.19/mo for a two-year contract, the price ranges from $11.99/mo for a monthly contract. Trusted by companies such as Forbes and Business Insider, Private Internet Access should be on your bucket list.

PIA extends its support for iOS, Android, Linux, Windows, and macOS – install it right away!

Get Started with PIA Now!

How to access Gmail in China? Hopefully, these detailed-out reviews will help you wisely choose a reliable VPN. In China, the situation of VPN use changes every other day, as the communist state releases new cybercrime laws way too often.

Not many VPNs can bypass such extreme security, the ones we have chosen here are ideal for China, as tested out. So, install a VPN from the recommended list before traveling and connect with your loved ones!