You are here: Home / VPN / Unblock Hulu in Australia And Watch Love Island in 2021

You won’t be able to watch shows like Love Island Australia, Killing Eve, or Rick and Morty without being able to unblock Hulu in Australia.

On-demand streaming services are increasing in popularity as time goes by, and in 2021, Hulu is definitely included as one of the top platforms. Unfortunately, though, Hulu Australia is not available yet.

In fact, it is strictly limited as a US-only OTT service, you cannot access it outside of America. The following message will show up:

“Hulu isn’t available to watch in your location.”

So, how to watch Hulu in Australia? Fortunately, you can rely on a VPN and mask your identity. We recommend Surfshark for its secure, fast, and inexpensive service. Subscribe to Surfshark and view geo-restricted content from Hulu – the VPN will bypass firewalls, it will be as if you are in America rather than Australia. It’s a win-win situation.

How to Watch Hulu in Australia

Follow these “four” quick steps and watch your favorite shows and movies on Hulu in Australia:

Now, this is the tricky part. Don’t worry though, we’ll guide you through it. VPNs such as Surfshark or ExpressVPN – can allow users to “fake” their identity and access sites from around the globe.

But you still need to have a valid Hulu account to stream exclusive content. After all, Hulu is a paid service, even in America. To get an accessible Hulu account, use the following hacks:

If you know someone who lives in America and has a credit card, you might wanna call them. Ask your friend to help out with Hulu’s subscription and get an account.

There’s no need to step outside of Australia, stream top-rated shows and movies from the comfort of your home. You can always repay the subscription fee back to your friend with Paypal or Skrill. Once you connect to a VPN and log on to Hulu, follow these steps:

Calling an old friend in the states isn’t particularly necessary. You can even use Hulu in Australia with gift cards. These digital cards can be purchased from local stores and online marketplaces. We suggest MyGiftCardSupply – this site has been trustworthy so far and has tons of other gift cards too. Otherwise, you can always check Amazon Australia.

After purchasing a gift card online, connect to a VPN and click on Hulu Redeem option on the site. While you proceed, fill in personal details, and eventually get a subscription. And don’t forget to use the correct zip code.

Working VPNs to Get Hulu in Australia

After thoroughly testing dozens of VPNs, we came to a conclusion and shortlisted “three” main ones. Rest assured, these three VPNs will easily bypass geo-restricted regions and stream Hulu in Australia (even in New Zealand). So, here’s a breakdown:

1. Surfshark – Inexpensive VPN with server coverage in locations where Hulu is available 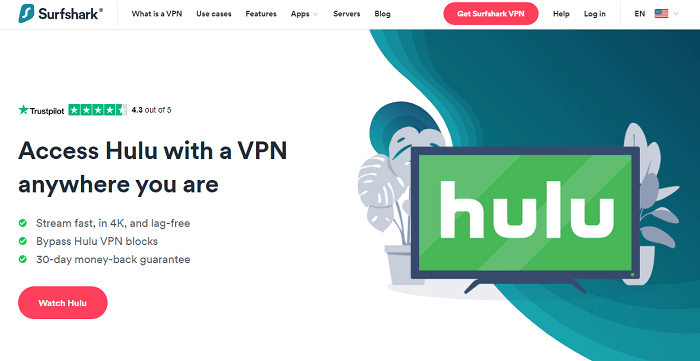 Surfshark is a globally known VPN that is mostly praised for its quick service, smooth UI, and consistent streaming ability.

Yes, mask your IP, and view Hulu while still residing in Australia or New Zealand.

Considering that the VPN has expanded its service to over 65 countries now, with 3200+ servers. Luckily, Surfshark has marked its presence in the United States (Hulu supported country), more than 20 cities are covered, and overall, there are 500+ servers.

It’s evidently clear that Surfshark knows the importance of US-based servers. Subscribe right now, there are a lot of other features you need to know about. Starting with the fact that Surfshark allows unlimited connections on one subscription.

The entire family can unblock Hulu in Canada, Australia, or even the UK and view movies like Frozen, Bolt, and Wonder Park – available on Hulu.

Also, if you are not satisfied with Surfshark in any way, ask for a refund under 30-days and get your money back – no questions asked.

Use Surfshark on either iOS, Android, macOS, Windows, Linux, Apple TV, or a console (Playstation/Xbox).

2. ExpressVPN – Unblocks just about anything from Hulu to Netflix 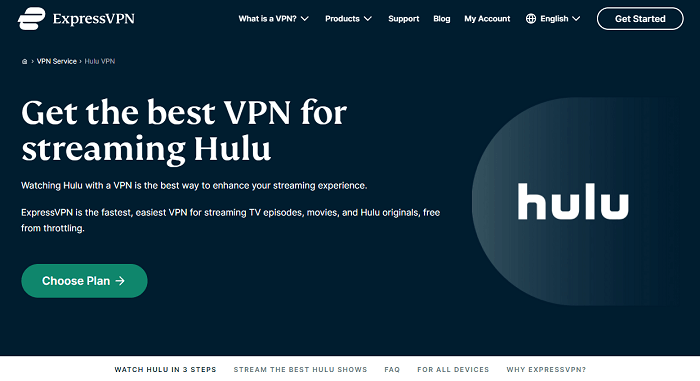 ExpressVPN, a VPN that assures an anonymous experience for you online. The VPN is often credited as the top-of-the-line VPN service provider and rightfully so.

Once you get ExpressVPN, accessing geo-restricted sites such as Hulu – becomes easier than ever before.

As of 2021, ExpressVPN has 3000+ servers, scattered all across 94 countries. Do remember that you need to look for US-based servers to access Hulu in Australia.

So, ExpressVPN is the ideal choice, there are a total of 32 servers spread across 19 cities. Los Angeles, the hub of entertainment, has 6 servers alone. So, sign-up on ExpressVPN from Australia or New Zealand at this instant and pretend as if you are in the United States.

And best of all, ExpressVPN offers unlimited bandwidth for its users without any additional charges – it’s a built-in feature. With ultra-fast speed, you can download anything and stream Hulu shows all night long. A binge-watch session with the entire family?

ExpressVPN has you covered. Connect ExpressVPN on up to 5 devices simultaneously, watch Hulu on every device.

In case you find out that ExpressVPN is not for you, later on, ask for a refund. There is a 30-day cash back guarantee, avail it – no commitment policy.

Install ExpressVPN on top-devices – iOS, Android, macOS, Windows, Linux, and even routers. The VPN is available on consoles, smart TVs, and as a browser extension. It is fully supported by all. 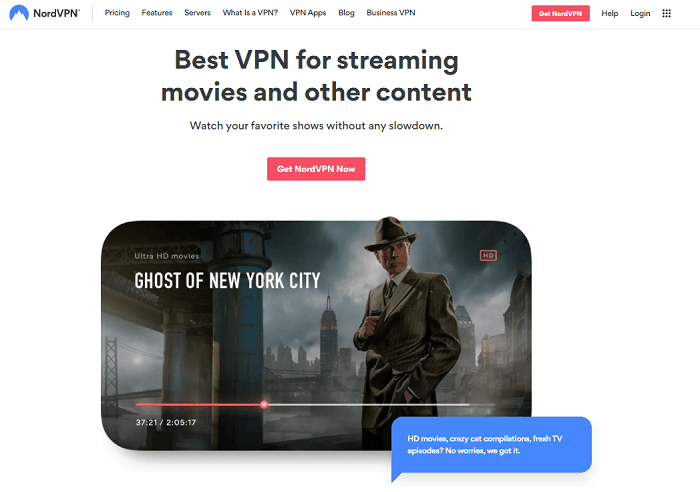 NordVPN is a secure, reliable, and advanced tool – makes it the perfect option. Aside from having a friendly UI and an abundance of features, there are other noteworthy facts as well.

If you want to access Hulu in Australia or New Zealand, consider NordVPN. Let us explain “exactly” why.

When compared to other VPNs, NordVPN truly stands out, considering the number of servers it has. NordVPN currently has over 5514 servers, spread around 59 countries – this fact alone makes NordVPN a tough contender.

In the United States, NordVPN has dedicated more than 1970 servers. To be precise, the servers are based in 15 different cities (New York, Chicago, Atlanta, etc). If one connection drops switch to another instantly.

In terms of speed, NordVPN has had a fairly good performance. The VPN has no bandwidth limit and allows its users to unblock Hulu in the United Kingdom, Australia and others to stream content without any limits.

Stay connected with NordVPN on all your devices, it allows up to 6 simultaneous connections – take advantage of this feature and let your entire family stream their desired movie on Hulu; at the same time.

Overall, NordVPN is a well-off deal, considering the perks you get. Plus, NordVPN does not ask for any commitment. Subscribe to a deal, and cancel it the next day.

There is a 30-day cash-back policy. Use NordVPN on Windows, macOS, Android, iOS, or Linux.

What Does The Hulu Plan Include?

Coming to the Hulu Plans as mentioned previously, the streaming service has reasonably priced deals when compared to other services – Netflix, Disney Plus, and Amazon Prime. Hulu has no-hidden charges and requires no commitment from its users, unsubscribe at any time.

Speaking of the plans, they are categorized as the following:

Hulu+ Live TV only has a one-week trial though. While the other two plans have a 30-day trial period. It’s up to you to decide.

Purchase either of these plans with your friend’s credit card. And if you are considering gift cards, there are two packets available: 25$ and 50$.

Is Hulu Not Available in Australia?

Well, the simple answer is – because Disney has a 60% majority stake in Hulu, for an undeclared reason, Disney has not expanded Hulu outside of the U.S. There are a lot of speculations surrounding this.

It may be due to different content distribution rights. Perhaps shows like Ramy, Castle Rock, and Catch 22 are not ready for an Australian audience yet. These are just theories though.

So, can you get Hulu in Australia? You most definitely can, but with a VPN. At least for the foreseeable future.

There has been no official announcement from Walt Disney about Hulu in Australia as of yet, so we’ll wait. Until then, you can use VPNs such as Surfshark. It allows users to stream content with unlimited bandwidth – subscribe to it right now.

List of Best Shows and Movies to Watch on Hulu Australia

It is worth mentioning here that the add-on channels and the huge library on Hulu is a major plus-point. Aside from classics such as Family Guy and South Park, you can even get blockbuster Hollywood releases.  Here’s a quick overview of shows and movies you can watch on Hulu: