Hotstar is a popular Indian streaming service that offers access to a variety of content including shows, movies, and live sports as well. You can watch Marvel, Star Wars, Disney, and Indian entertainment all under one roof.

However, the Indian OTT streaming service is not available in the US anymore. After its merger with the Walt Disney Company, the service opened its doors to US viewers but soon stopped offering its content in November 2021.

Because of geo-restrictions, you can no longer access Hotstar in the USA. It is now only available to stream in a few countries only like India, Singapore, and the UK. But watching Disney Plus Hotstar in USA or anywhere in the world is very easy with the help of a VPN.

A VPN will allow you to bypass the regional restrictions of Hotstar and access its content in the US or wherever you are in the world. Read on to find out everything you need to know about unblocking Disney+ Hotstar in the USA.

How to Watch Disney Plus Hotstar in USA (Easy Steps)

Why Do You Need a VPN to Unblock Disney+ Hotstar in the USA or Outside India?

Disney Plus Hotstar stopped offering its services in the US in November 2021, therefore to access the streaming platform you need a VPN.

Due to licensing agreements and streaming rights, Disney Plus Hotstar is not available to watch outside limited countries like India, the UK, and Singapore. If you try to watch the service in the US, you will get an error message on your screen.

Videos on www.hotstar.com/in are not available in the U.S.

This is where a VPN comes in. With a VPN, you can easily bypass these geo-restrictions and watch all Indian Hotstar content from anywhere outside India.

When you use a VPN like ExpressVPN, and connect to an Indian server, you get an Indian IP address that helps you access Hotstar’s full catalog of content from anywhere in the world.

Here is a quick overview of the three best VPN services to unblock Disney+ Hotstar in the USA or outside India:

3 Best VPNs to Watch Disney+ Hotstar in the USA

Not all VPNs work with Disney Plus Hotstar outside India. However, after testing 30+ VPN services, we have shortlisted the three best VPNs based on their superb unblocking ability, server speed, and overall performance.

Here is a detailed overview of the three best VPNs to stream Disney+ Hotstar in the USA or outside India. 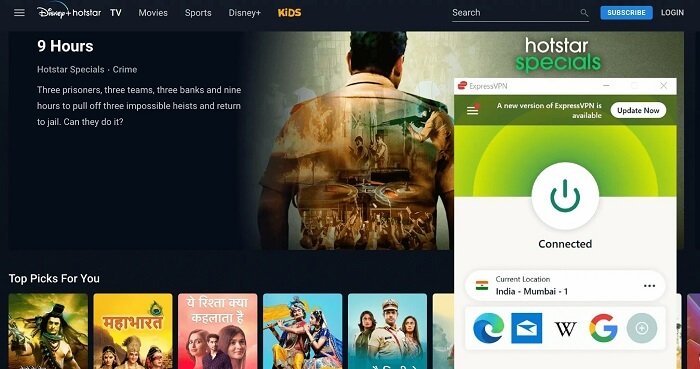 ExpressVPN is the best VPN for unblocking streaming services like Disney+ Hotstar in the US. Its servers run on advanced unblocking technology that can easily bypass Disney Plus Hotstar’s geo-restrictions.

It has 3000+ servers located in 94 countries. Among these, you will find plenty of servers in India that can help you watch your favorite content on Hotstar.

Moreover, all ExpressVPN servers offer excellent speed, so you can enjoy streaming in HD without buffering. It offered us a download speed of 28.71 Mbps on a 30 Mbps base connection, faster than its competitors.

In terms of performance, ExpressVPN was great while streaming. We connected to its India server and were able to watch 9 Hours on Disney+ Hotstar easily without any lag.

Apart from that, we have tested ExpressVPN and it works with all major streaming services, like Netflix, Voot, Zee5, Hulu, SonyLiv, BBC iPlayer, and more.

In terms of compatibility, ExpressVPN works with iOS, macOS, Windows, Android, Nvidia Shield, Smart TVs, and other streaming devices. It allows 5 multi-logins and there is a Smart DNS feature called MediaStreamer as well.

It is available for $6.67/mo and also offers a 30-day money-back guarantee. Check out our complete ExpressVPN review to find out more about this provider and its performance.

2. Surfshark – Affordable VPN to unblock Disney+ Hotstar in the USA 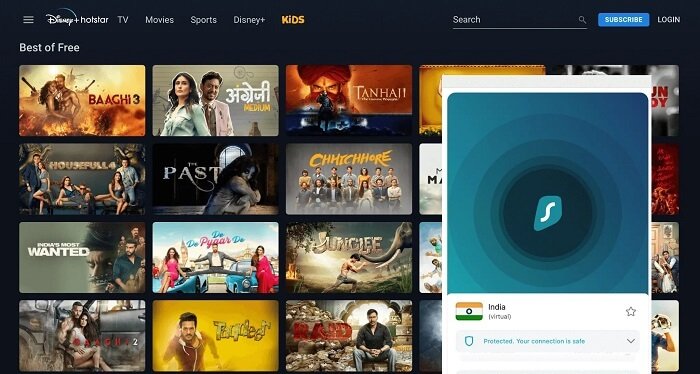 Surfshark is an affordable VPN for watching Disney Plus Hotstar with the ability to bypass Hotstar’s geo-blocks and give you unrestricted access to its content.

There are over 3200 servers in 65 countries, and multiple servers in India to help you hide your IP address and give you full access to Indian Hotstar content from anywhere in the world.

While testing, we connected to its India server, and with our new Indian IP address, we were able to watch free movies on Disney+ Hotstar. We streamed Baaghi 3, and Chhichhore without any buffering.

Surfshark is also a great choice for streaming other popular geo-restricted platforms like Disney Plus, Voot, Amazon Prime Video, SonyLiv, and many more.

During streaming, Surfshark offered us great speeds on its Indian servers. On a base connection of 30 Mbps, we got an average download speed of 25.91 Mbps which was great for buffer-free streaming.

Surfshark is a great option if you are on a budget, as it offers unlimited simultaneous connections with easy-to-use apps for various devices like iOS, Windows, Android, and Mac. Surfshark also uses 256-bit AES encryption to keep your internet traffic safe from prying eyes.

It is available for $2.30/mo (Save 82% and get 2 extra months FREE with 24-month plan) along with a 30-day money-back guarantee. Learn more about its features, pricing, and more in our detailed Surfshark review.

3. NordVPN – Largest VPN server to stream Disney Plus Hotstar in the USA 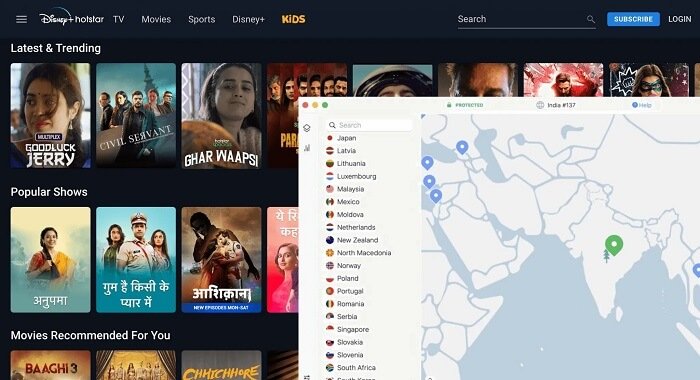 If you are looking for a reliable solution for accessing Disney+ Hotstar, NordVPN is another great choice. It offers a large server network that can help you watch Indian content on Hotstar in the USA or anywhere outside India.

NordVPN has 5200+ servers in 59+ countries, including India. All its servers have SmartPlay technology running in the background which makes bypassing geo-blocks on streaming services easy.

While connected to its India server, we could easily unblock Disney plus Hotstar and access all popular and latest trending shows. It also gave us a fast speed of 24.85 Mbps on a 30 Mbps base connection on its Indian server, fast enough for buffer-free streaming.

NordVPN can also unblock geo-restrictions on other streaming services such as BBC iPlayer, HBO Max, SonyLiv, Zee5, and many more. Therefore, it is an ideal VPN for streaming international content from anywhere.

It offers 6 devices connection on a single subscription. NordVPN has native apps for all devices such as Windows, macOS, Linux, Android, iOS, Android TV, Amazon Firestick, and more. A Smart DNS option is also available for those who want to stream Hotstar on Apple TV, gaming consoles, and other streaming devices.

NordVPN is available for $5.29/mo and it also offers a 30-day money-back guarantee. If you wish to learn more about this VPN in-depth, make sure to check out our complete review of NordVPN.

How Can You Subscribe to Disney+ Hotstar in the USA

Indian Hotstar offers plenty of content for free. However, if you want full access to the movies and shows, you can subscribe to Disney+ Hotstar Premium. 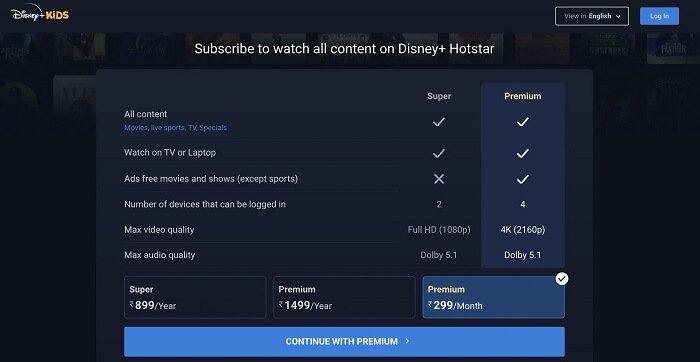 Which Devices are Compatible with Disney Plus Hotstar?

Laptop, or smartphone, you can stream your favorite shows and movies on Disney+ Hotstar on a variety of devices as there are apps available for multiple platforms like:

How to Download and Watch Disney Plus Hotstar On Your Device

You can easily download and unblock Disney+ Hotstar on a variety of devices. However, to download the app in the US, you will first need to set up a VPN app on your device.

We have prepared step-by-step guides on how to get Disney Plus Hotstar on popular devices using a VPN.

How to Stream Hotstar on Android

Follow these steps to unblock Disney+ Hotstar on Android devices:

How to Watch Hotstar on iOS

How to Stream Hotstar on Windows

Follow these steps to unblock Disney+ Hotstar on Windows PC:

How to Watch Hotstar on Mac 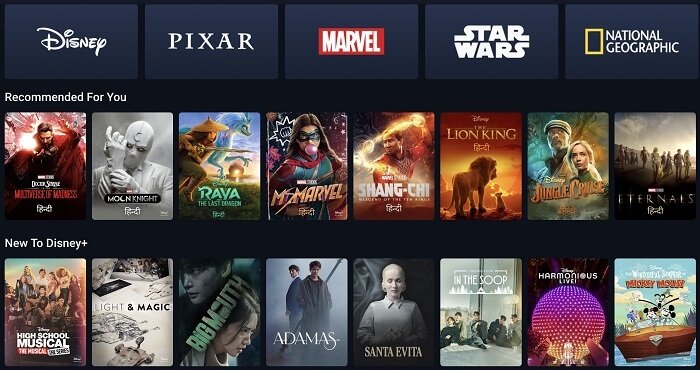 Disney Plus Hotstar boasts a huge catalog of movies and shows from around the world, including Bollywood and Hollywood blockbusters. You even get access to sporting events, including the Indian Premier League, and football matches.

Here are some of the world’s most popular shows, movies, and new releases on Disney Plus Hotstar.

New Releases on Disney+ Hotstar in 2023

Get ready as some exciting new shows and movies are coming to Disney Plus Hotstar. Here are some exciting titles to look forward to:

The prequel to Game of Thrones, House of the Dragon is available to watch on Hotstar. The fantasy period drama is based on George RR Martin’s book starring Emma D’ Arcy, Matt Smith, Paddy Considine, Milly Alcock, and Olivia Cook.

Is Disney Plus Hotstar available in the USA?

No, Disney Plus Hotstar is not available in the USA. It is currently only available in a few countries like India, the UK, and Singapore, but you can watch it in the USA with a VPN like ExpressVPN.

Where has the content of Disney+ Hotstar USA Moved? Is it still Available?

Hotstar has discontinued its services in the USA since November 2021. Viewers can now access some of its content on The Disney Plus Bundle (Disney+, Hulu, ESPN+) or use a VPN to bypass geo-blocks to access its content in the US.

Is Hotstar and Disney Plus Hotstar the same?

What to do If you can’t get Hotstar with a VPN?

If you are using a VPN and it is not working with Hotstar, try switching to a different VPN server. It is possible that Hotstar has blocked your IP address. It is helpful to use a VPN with plenty of Indian servers that can easily unblock Hotstar.

Top Channels Other than Disney+ Hotstar to Watch in/outside USA

You can check our other channels that you can stream in the USA:

Now you can unblock channels that are geo-limited anywhere in the world easily.

Disney Plus Hotstar offers exciting content from various production houses, but its access is limited outside a few countries like India, the UK, and Singapore. The service launched in the USA but was soon discontinued. Therefore, to watch Disney+ Hotstar in the US, you need a VPN to bypass its regional restrictions.

By using a VPN, you can virtually appear in India and access your desired content on Disney Plus Hotstar in USA or anywhere outside India.

We recommend using ExpressVPN. It is the best VPN for unblocking Disney+ Hotstar available for $6.67/mo (Save 49% and get 3 extra months FREE with 12-month plan) along with 5 multi-logins. 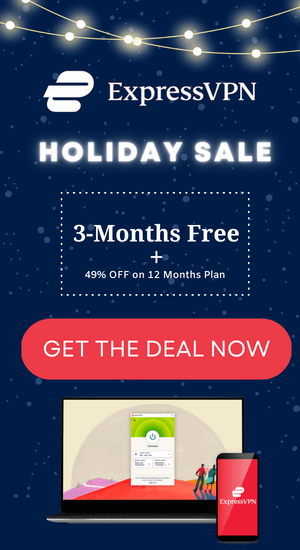