The Netherlands is one of the few countries in the European Union where security laws are not given much importance. If you are visiting the country, you should definitely use a VPN. In this article, we will enlighten you with the best VPNs for the Netherlands.

People prefer to opt for VPNs to get a sense of anonymity. Over the years, it has become vital to use a VPN. The Netherlands does not care much about the privacy of an individual.

The Netherlands is required to follow the European Union Data Retention Directive (DRD). And unfortunately, the directory is as invasive as you expect it to be. This is where VPNs come in. Keeping this in mind, we would like to provide you with expert ways to combat the EU’s DRD.

Now that we have covered the basics of the need for these tools, here is a shortlist of the best VPNs for the Netherlands that you can quickly look over before we delve into the details of them.

List of the Best VPNs for the Netherlands in 2022 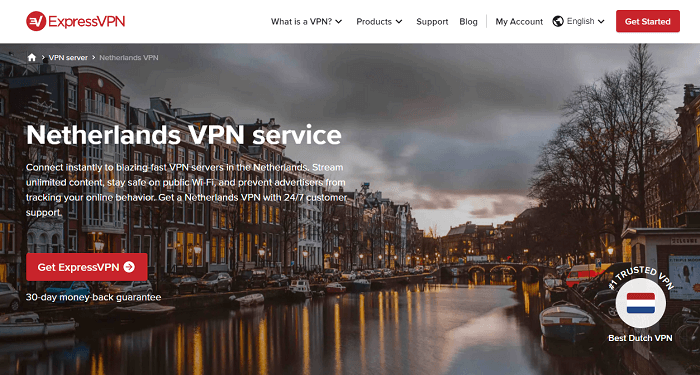 The VPN that made number 1 in this list – as expected – is ExpressVPN. It should not come as a surprise to you that ExpressVPN is, once again, dominating the VPN world.

The easiest way to put it is that you will get exactly what you pay for when you are subscribed to ExpressVPN. Whether you get this particular VPN for your work or for your home, it will result in a suitable choice in the end.

As this provider has 3000+ servers in 94 countries, they can ensure high speed and efficiency. With more than 5 servers in the region of the Netherlands, you will not have to worry about buffering or lagging.

It is important to mention that ExpressVPN can bypass Netlix’s extremely secure firewall with ease. It can unblock several servers including streaming services and websites.

The VPN operates from the British Virgin Islands, a country where data retention laws don’t exist – it’s safe to say that your data won’t get shared with the ISP and local agencies.

ExpressVPN has a strict no-logs policy (check out our list of verified no-logs VPN services) which means that they do not keep track of your activities online after you subscribe and use their service.

In addition to this, they have a highly secure 256-bit encryption. Again, this helps them dominate the privacy and security section of VPNs.

One of their most efficient features is the Kill Switch. ExpressVPN takes pride in its security measures. This includes their DNS leak protection feature. Your web surfing stays hidden as well.

It supports nearly all devices which include iOS, Windows, Linux, and such. Moreover, ExpressVPN supports up to 5 connections at a time. Extensions for Chrome and Firefox are available as well.

In customer support, Live Chat is available 24/7. ExpressVPN has a 30-day money-back guarantee offer along with a free trial. We recommend this VPN for dutch people who want privacy and unblocking at their tips. 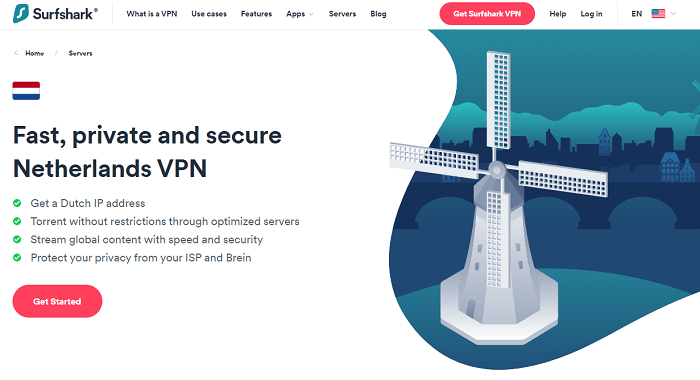 Surfshark is a rising VPN that has managed to grasp the attention of the VPN market in the last few years. One of its biggest factors is that they bring so much to the table with a price so low it is unbelievable.

As compared to Surfshark’s competitors, it is priced moderately low as it costs you $2.30/mo (Save 82% and get 2 extra months FREE with 24-month plan). It is important to note that Surfshark is recommended VPN for multiple devices and provides its users with unlimited connections thus you can use your VPN on your desktop, laptop, and mobile phones simultaneously with just one account. Surfshark has 3,200+ servers in 65 countries.

If you are a fan of uncomplicated interfaces, menus, and myriad options, then Surfshark is, without a doubt, the perfect fit for you.

All you will see on your interface are options for ‘Quick connect’ and ‘All locations’. These are accompanied by a Settings icon and that is about it. Whether you appreciate that simplistic detail – or lack thereof –  depends entirely on what you prefer.

Additionally, the VPN originated and still runs from the British Virgin Islands. There are no chances of your data being watched over by governments.

Your online identity remains secure with Surfshark through their newly added protocol called WireGuard. In addition to this, Surfshark allows P2P with ad-blocking.

The encryption is AES-256-bit. There are several features that add to your protection that are worth mentioning like Whitelister and Multihop.

The Multihop mode allows the customer to use a double VPN if they want. Additionally, Surfshark has its own search engine called Blind search.

You can enjoy all of these features by taking advantage of the 7-day trial. Surfshark offers a 30-day money-back guarantee as well.

NordVPN has been described as a provider that makes your experience – as a user – worth every penny. NordVPN has achieved its success by creating a devoted service that meets the requirements of each user.

An unmatchable experience of swift browsing and streaming on a budget is rare to find however NordVPN has mastered this skill.

It is fair to say that they managed to make it to the top of the VPN chain through their secure and vast set of servers that are all over the world.

According to NordVPN’s website, they operate with more than five thousand and two hundred 5200+ servers in 59+ countries including the Netherlands.

As mentioned above, NordVPN currently owns the highest number of servers in the Netherlands. Through their website, we can note that there are two hundred and thirty (230) servers in Holland with obfuscated servers. This comes with P2P sharing as well.

Now, let us discuss online security. NordVPN is famous for its military-grade encryption that comes with an efficient kill switch.

This Kill Switch works similarly to ExpressVPN’s. NordVPN provides a well-structured Domain Name System (DNS) leak protection. If you think this is a good deal, then wait till you hear about their Double VPN feature.

Double VPN is a unique security feature, to say the least. It is an advanced security measure that routes your traffic through 2 VPN tunnels as opposed to the usual. This means your IP gets encrypted twice which is known as VPN server chaining.

NordVPN runs from Panama, a country where there are no data retention laws – safeguarding your data. This VPN implements a strict no-log policy and they are quite grave when it comes to online privacy.

The encryption level of this service is military-level which means they are catching up to ExpressVPN. The bandwidth offered to their users is surprisingly unlimited.

The application supports several platforms such as Windows, Linux, iOS, and even Android. In addition to this, subscribers receive proxy extensions as well.

NordVPN offers a free trial for 30 days. Like ExpressVPN, they also offer a 30-day money-back guarantee thus anyone can test it out to check its compatibility. The customer support is very satisfactory.

CyberGhost VPN has built a dedicated fanbase. An interface loaded with features and user-friendly is hard to find. It has commodious buttons that are labeled for the user’s convenience.

CyberGhost VPN is truly effective when it comes to connectivity. The service is based in Germany/Romania. And, there are 7700+ servers in 90+ countries worldwide, so we can say that you have a vast selection to choose from.

On that note, Cyberghost’s servers upgrade gradually thus they keep on improving. You can turn on DNS leak protection and it offers 256-bit encryption.

Another feature is the Smart Rules panel. Although, according to their website, they do not currently support the IPv6 protocol. The activation of IPv6 might cause issues connecting to their servers so if that is something you look for in your VPNs then Cyberghost might not be your perfect fit.

Cyberghost is a great help when you want to access restricted content and websites including streaming services such as Netflix, Disney+, and such.

It’s one of the most ideal choices when it comes to unblocking streaming sites. Streaming/torrenting features in Cyberghost prove to be useful since it reduces the time spent in testing each server to see if they work with Netflix and similar streaming services. CyberGhost is available on several platforms including Mac, Windows, Android, iOS, etc. Also, it is a recommended VPN for Nvidia Shield.

You can experience a free trial for a day and after that, you can go for the subscription that has a 45-day money-back guarantee.

5. PrivateVPN – Unblocks Most Streaming Services in the Netherlands 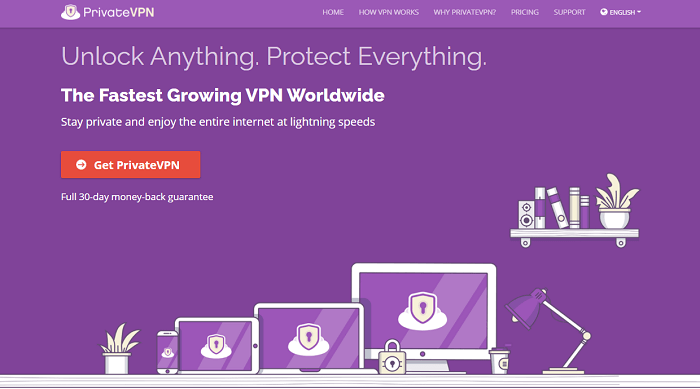 As the name suggests, PrivateVPN is a growing Virtual Private Network that claims to be one of the best VPNs for security and privacy. PrivateVPN offers 200+ servers in more than 60 countries.

They claim that they provide their users with an easy-to-use interface and – truth be told – it really is! Due to the accurate labeling in their application, anyone can use it without any complications.

Now, let’s get into their features.

Additionally, with their unrestricted bandwidth, you can remain assured that the high speed will be constant. It is also a torrent-friendly VPN due to its unlimited P2P file sharing.

PrivateVPN is based in Sweden, which follows the 14-Eyes Alliance jurisdiction.

If you would like to check its compatibility, then PrivateVPN offers a 30-day money-back guarantee on subscription plans along with a 7-day free trial.

Is VPN Legal In The Netherlands?

Regardless of what you are doing online in Holland, it is probably the best idea to use a Virtual Private Network (VPN) while surfing the web.

Now, the question arises, why?

Well, because you can and you are allowed to. That’s correct, VPNs are completely legal in the Netherlands. As mentioned above, the government-mandated Internet censorship that we are accustomed to, it does not exist there.

How To Change Your IP Address With A VPN?

The answer lies within the question. You see, when you sign up with a VPN provider, you connect to their network in a reliable, uncomplicated, and elementary way to remote servers that are set up across the entire world to tunnel your internet connection through.

In simple words, your Internet Protocol (IP) address goes through several tunnels so it can be masked. This way, the authorities can not recognize you in the system.

Through the use of the VPN of your choosing, you can change your IP address and choose another IP address according to your needs.

Thus, all you need to do is get a reliable and secure VPN and let it do its job for you. For instance, this is how you do it on ExpressVPN:

In this age of complete digitalization, being safe online is a priority even in the Netherlands. Unfortunately, we are in dark times where we have to protect ourselves and our on-web presence along with our data from our government.

Nevertheless, under these circumstances, we must learn to adapt. We can do this by selecting an authentic and secure VPN.

According to hundreds of VPN and tech experts, ExpressVPN is the leading VPN for the Netherlands. Every year a list of the top VPNs is published and ExpressVPN manages to be the number 1 VPN.

However, it is crucial that you go through these VPNs yourself and evaluate each with the utmost care and attention.