It goes without saying that Hong Kong’s residents are in dire need of a reliable VPN. Under the growing influence of mainland China, Hong Kong’s status as a separate, democratic state remains under threat. The region’s “one country, two systems” ideology might cease to exist in the upcoming years.

In the worst-case scenario, Hong Kong could also become a victim of intense censorship, much like its neighbor – China.

Under the communist party, China’s controversial security law has already been passed, and it’s only a matter of time till Hong Kong gets barred from using basic digital necessities, i.e, Facebook, Google, and Spotify.

With constant uncertainty surrounding Hong Kong’s cyberspace, protesters have become vigilant and are seeking a safe alternative; the need for encrypting addresses, going rogue, and surfing the internet without worrying about constant surveillance is increasing. In such a situation, choosing the best VPN for Hong Kong is a great option to stay safe and anonymous.

Don’t want to read the whole article? Well, ExpressVPN turns out to be the best VPN service for Hong Kong.

It offers 3000+ servers in 94 countries and provides 5 simultaneous connections at a cost of $6.67/mo. The 30-day money-back guarantee makes it the top choice for expats or travelers.

Get Started With ExpressVPN Now!

In this article, We evaluated different VPNs based on their geo-spoofing abilities; how efficiently they can change your IP address to another location. It’s worth mentioning that only a few VPNs can bypass China’s strict cyber laws, and fortunately, we have covered those. So, before we fully delve in, here’s a quick breakdown:

Here is a quick overview of the best VPN providers for Hong Kong:

We have tested 30+ VPNs but only selected the 5 best VPN services for Hong Kong that offer reliable services. These VPNs have been chosen based on some features like speed, servers, security, price, and more. 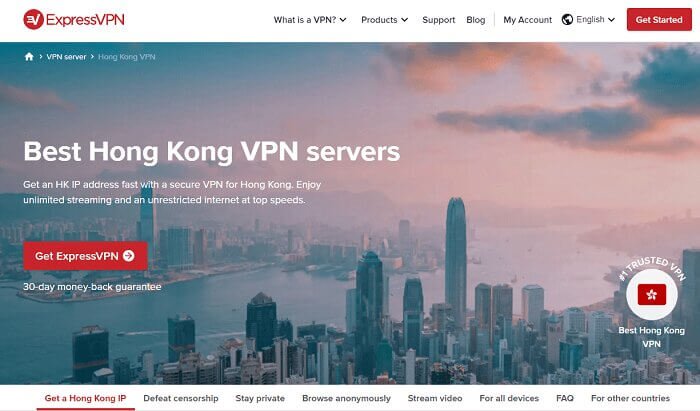 ExpressVPN is an all-rounder VPN for Hong Kong as it offers the fastest speed for torrenting, streaming, and gaming as compared to other VPNs in the industry. Check the review of this VPN service on communities like Reddit and Quora where reviews are brutally honest, you’ll notice that it is one of the most discussed VPNs due to its excellent features and fast blazing speed.

Available for use on Android, iOS, Nvidia Shield, macOS, Xbox One, Firestick, Windows, Smart TV, and even Linux – it caters to everyone. From mobile users to desktop ones, ExpressVPN has marked its steps everywhere, quite literally.

Choose from one of the 3,000+ servers and easily disguise your location – while being based in Hong Kong. When it comes to privacy, ExpressVPN does not disappoint you as it strictly abides no-log policy.

With its state of the art MediaStreamer feature – access Hulu, Netflix, and other streaming services. You don’t even have to plug in a VPN connection, simply set it up on the router. If you face any problem along the way, give them a call. Their 24/7 live customer support is more than happy to assist.

In technical terms, it uses 256-bit AES-CBC protocols and HMAC authentication. So, get a yearly plan for $6.67/mo or if you’re not satisfied with the service, get a refund within 30-day. Moreover, if you want to give it a try so, you can enjoy ExpressVPN’s free trial offer too. Read our detailed review of ExpressVPN to know more about this VPN. 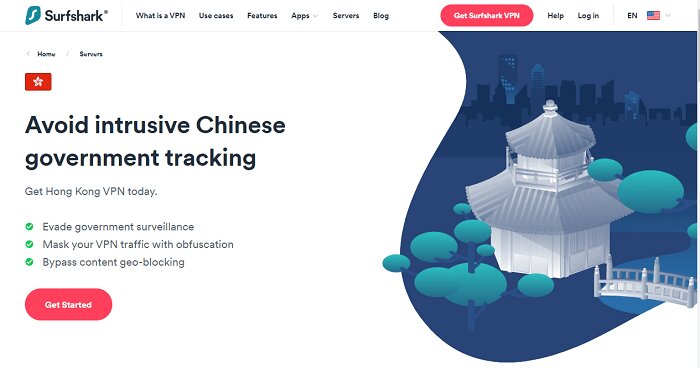 For the number of services Surfshark offers, its price is a bargain. For just$2.30/mo (Save 82% and get 2 extra months FREE with 24-month plan), you get two years of services and there are no hidden charges either. This affordable VPN is fast, straightforward, and unblocks even the most protected streaming services – including Netflix, Amazon Prime, BBC iPlayer, and Disney Plus.

The company behind Surfshark is based in the British Virgin Islands, a remote territory where data isn’t hoarded. Assuring that once a VPN connection is established, your data is in safe hands.

Considering that Surfshark started out two years ago, having even 3200+ servers in 65 countries is an achievement. And most importantly, this application even works in China.

To save your data from authoritarian governments, OpenVPN, IKEv2 security protocols, along with military-grade encryptions are extensively used. For setting up the application on your router, there’s a manual procedure.

Additionally, its NoBorders feature is remarkable. To trick ISPs, Surfshark completely reshapes traffic data such that the satellite data gets hidden and there’s no trace of encryption. Authorities won’t even realize you’re using a VPN.

Surfshark even has multi-platform support, catering to all kinds – macOS, Android, iOS, Windows, and Linux. If you have any doubts, later on, ask for a money-back and get a refund in under 30-day. You can check our complete review of Surfshark if you are thinking to get this VPN.

NordVPN has its own clear-cut set of protocols and is thoroughly obliged by it. It is the best no-log VPN as Its privacy policy is detailed out, audited, and assured by PricewaterhouseCoopers. NordVPN uses double encryption, it’s clear how it prioritizes security over anything else.

The software has its own Onion over VPN network which routes your traffic its own network, and then the Onion network.

In addition, to offering reliable features for basic VPN users, it also offers cloud VPN services for business consumers. As it has excellent security features, this VPN protects your business from online cyber attack.

NordVPN unblocks popular streaming services like Netflix, Hulu, BBC iPlayer, Disney Plus, Amazon prime, and more. Also, it allows you to stream Voot in USA,  Disney Plus in Philippines, Hulu in Canada, etc.

In addition, Customer support is quite cooperative as well. if you face any configuration issues, contact them. It just costs $5.29/mo.

All in all, NordVPN sounds like the ideal option, with 80 servers in Hong Kong, you won’t face any connectivity issues – easily watch local content from abroad. Which platform can you stream it on? Well, on both desktop and mobile.

Also, surprisingly, NordVPN’s company is based in Panama, a whole different corner of the world where data retention laws don’t exist. If you’re looking for a Hong Kong VPN, this option is worth considering. And a 30-day money-back guarantee option is always there. 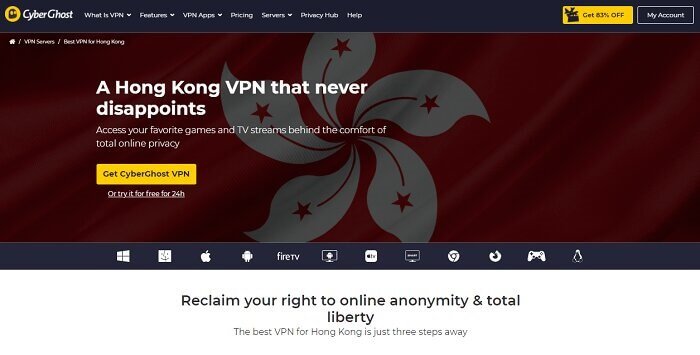 CyberGhost originates from Romania and came into being nine years ago. So far, it has received phenomenal feedback from users worldwide and has been one of the top-ranked VPNs.

Romania most likely plays a role in that since the country has no data retention laws, hence, no log.

For media enthusiasts, CyberGhost is a must-have. It can break through most streaming outlets instantly. Currently, at 7700+ servers worldwide, and 71 servers in Hong Kong, it surely is growing.

Coupled with high-tier encryption; 256-bit AES, 2,048-bit RSA keys, and SHA256 authentication. There is an internet kill switch as well, protecting your data once it is breached.

Install CyberGhost on either iOS, Android, macOS, or Windows right away. At 82% off, subscribe to a 36-month plan priced at $2.29/mo. And for refunds, send a request under 45 days, as they offer a no-questions-asked 45-day money-back guarantee. You can read our full review of CyberGhost If you want to know more about this VPN.

TorGuard was founded in 2007 and is a trustworthy name when it comes to anonymity online. Out of their 3,000+ servers, a few are located in Hong Kong and work efficiently for the most part.

If you wish to change your location, you’ll have to disconnect from the VPN beforehand – the “extra” step might seem annoying.

Also, despite the unlimited bandwidth, the base version fails to access Netflix in Hong Kong. To find dedicated streaming IPs, you will have to dig deep. TorGuard does not compromise on security though.

It’s highly customizable with different protocols. Whether it be Stunnel, OpenVPN, SSTP, or any other. The encryption keys aren’t any less either – AES-256 and SHA-512 provide a secure experience.

For the pricing, TorGuard’s plans start off from $9.99/mo and differ according to the bundle.

So, get into a fully “stealth” mode with TorGuard and if you face any problems, contact their representative on email support – they are very helpful and are available 24/7. Connect on multiple (macOS, Windows, Android, and iOS) devices with one account.

How Can You Choose the Best VPN Provider for Hong Kong?

Well, there are many VPNs in the market but not all are suggested so, to choose an ideal Hong Kong VPN service here are some factors that you need to consider when choosing a VPN provider.

Waiting for an application to load up is troublesome. Lack of consistent flow can be a huge disturbance. It’s always better to look out for a fast, consistent VPN service.

At the bare minimum, military-grade encryption is necessary. Protection of data should be your top priority, encrypting it is the first step of doing so.

Your data’s confidentiality on the internet matters. Especially in Hong Kong, your IP address should not be disclosed to ISPs at any cost. Having WebRTC and DNS leak protection is an added bonus too.

Most worthy VPNs come at a cost, so one should go through a trial run before fully investing in one. A 30-45 day refund guarantee is a prominent policy by VPN companies.

To avoid connectivity issues, make sure the VPN you choose is equipped with well-off servers across the globe. This helps you to get the IP address of your choice to unblock restrictions.

Can I use Free VPN in Hong Kong?

If you’re on a tight budget and are searching for a free Hong Kong VPN service, we have unpleasant news. Most free VPN services are known for invading their user’s privacy and failing to safeguard information.

Apart from this, it might not be evident but, they might download data caps, fluctuate bandwidth connections, and choose sketchy servers. It’s best if you avoid it,

Also, a free Hong Kong VPN relies on spam advertising.  You’d have to deal with annoying pop-up ads on a daily basis. It’s not worth the stress. Investing in a noteworthy VPN is good for the long run.

However, if you insist on getting a free VPN, there is always an option.

Windscribe – Encrypted with AES-256, it’s definitely worthwhile. With decent server placements, it can unblock the most well-known services. And it has a lot to offer for a “free” VPN.

Get a 10GB data allowance without any charges, and stream your favorite show in Hong Kong. Available on multiple platforms, use Windscribe on your Amazon Fire TV through either Chrome, Opera, or Firebox.

Even if you end up consuming 10GB in less than a week, it’s not an issue, there’s nothing to lose.

Are VPNs illegal in Hong Kong?

No. As of right now, it’s completely legal to purchase and use VPNs without any hindrances. In fact, a lot of VPN companies have headquarters situated in Hong Kong, which easily fakes your location.

What is the best VPN for Hong Kong?

ExpressVPN is the best and fastest VPN service for Hong Kong. Its headquarter is based in Safe jurisdiction, does not keep logs, offers 3,000+ servers in 94 countries, unblocks geo-restricted websites quickly, provides 5 simultaneous connection on a single subscription, provides great features like kill switch, AES encryption, etc, offers fast blazing speed and comes up with a 30-day money-back guarantee.

If you are concerned about your online privacy and security in Hong Kong then choosing a VPN is a great option. Use a VPN that offers excellent security features, unblock restrictions, a good number of servers, a faster connection, and more. From our viewpoint, ExpressVPN should be everyone’s choice for Hong Kong, since it is the fastest VPN.

We have highlighted the 5 best VPNs for Hong Kong but you can evaluate them personally and make a decision. As mentioned, it’s important to look at the characteristics of a VPN and whether it aligns with your requirements.

Your decision should be made whilst considering Hong King’s political climate. Hopefully, you’ll make the right choice.